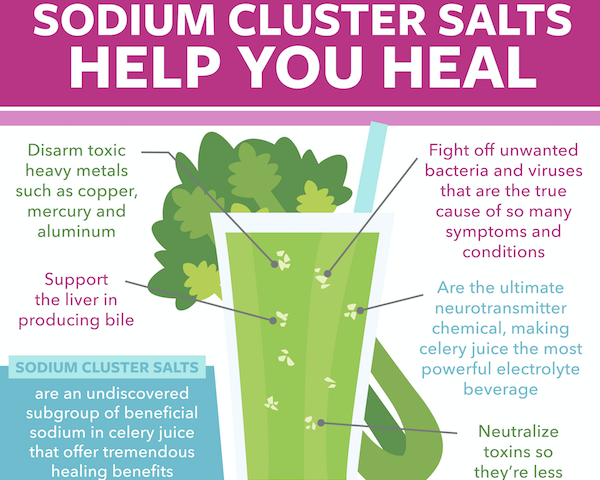 “If you have a shaky history with sodium and the word makes you nervous, let me assure you that the sodium in celery juice is beneficial. Even if you’re on a low-sodium diet, you can still have celery juice. It’s not like eating food that’s had table salt—or even healthier salts like Himalayan rock salt or Celtic sea salt—thrown on it. While your body does not see regular salt added to food as a friend, it accepts the sodium from celery juice as one of its own.

Celery juice is on your side. It actually removes crystallized toxic salts that have been in your organs for years. Now, if you get a blood test when you’re on celery juice, it could show elevated sodium. What the test is really detecting are these old, toxic salts that celery juice is rounding up and sending out of your body. Plus, chances are you haven’t given up table salt, so the blood analysis is picking up on that salt in your system as well. Blood testing isn’t nuanced enough to pick up on the difference.

So celery juice’s beneficial macro sodium only stabilizes the blood; it won’t lead to high sodium readings. Again, though, it could take a little time to get to those stabilized readings, or they could come and go, because (1) it’s really easy to overindulge in table salt since it’s practically everywhere, and that’s going to show up on a blood test, and (2) periodically, celery juice is going to be clearing out pockets of old, toxic salt as it reaches them deep in the organs, and that’s going to throw off blood test interpretations.

Celery juice’s complicated structures of beneficial sodium are elevated above other types, with different jobs and responsibilities. This is an entirely different make and model of sodium. It serves as a critical component of neurotransmitters—better said, it’s the ultimate neurotransmitter chemical. It’s what makes celery juice the most powerful electrolyte beverage on the planet. Nothing can surpass or even equal it.

Let’s talk more about the undiscovered subgroup of celery juice’s sodium that I call sodium cluster salts. “Sodium” and “salt” may sound a bit redundant, and yet it communicates that they are mineral salts that cluster around the macro sodium in celery juice. That is, sodium cluster salts are a separate acting group of compounds that surround the element we know as sodium in celery, all of it arranged in a structured form, almost like our solar system. Trace minerals also reside in these living, moving clusters. Some trace minerals are bonded to the sodium cluster salts themselves, and some simply float inside the clusters.

There is information for us within these clusters. That’s rare. For the most part, plants are all about themselves. (Sound a bit like humans sometimes?) The information they contain is largely geared to sustaining themselves in their habitat, to accessing nourishment, to survival. Celery is different. Some of its information is for us, or for other animals consuming it. Sodium cluster salts aren’t there as a defense mechanism or to keep the celery healthy as it’s growing; they aren’t there to keep the plant alive. They’re for us. Sodium cluster salts contain information for our own well-being that’s activated when it enters our bodies. Information from the plant—the herb—itself and information from the sun as the plant was growing. Information about its purpose and how it can help the creature consuming it. Information about the complex job of extending our lives. Even if celery is grown in poor soil, it will still possess its cluster salts.

All salt is not the same. Although it can be easy to believe that sodium is sodium whether it’s in the ocean, a vegetable, soil, rock, or a salt lake, it’s not. If viewing it properly in a chemist’s lab, a technician would discover the various salts contained within the sodium in celery juice. That technician would find that the salts cluster around each other, acting as one—as the sodium in no other herb, vegetable, or mineral does. Not even the salt in the ocean behaves in a particular way that this humble herb does.

The sodium cluster salts in celery juice are able to neutralize toxins as they’re floating through the bloodstream and organs. That means that when the cluster salts touch them, they disarm the troublemakers, making them more friendly and acceptable to the body and less toxic so that they don’t do harm to our human cells and organ tissue.

Toxic heavy metals are a particular type of toxin that celery juice’s sodium cluster salts take on. Heavy metals have a destructive, active charge to them that causes the metals to be damaging to liver cells, brain cells, and other cells throughout the body. Cluster salts defuse the charge, rendering them inactive and less aggressive, specifically disarming toxic heavy metals such as copper, mercury, and aluminum.

Sodium cluster salts also fight off unwanted bacteria and viruses. (You’ll read so much more about this ability throughout the next chapter.) Tricky bugs such as strep can’t become resistant or immune to them, the way they can to pharmaceutical antibiotics, so the cluster salts keep on working as you drink celery juice over time. Celery juice’s mineral salts are able to kill off bacterial, fungal, and viral overgrowth as they travel through the small intestine and colon, and even once they’re absorbed into the bloodstream and pulled up into the liver through the hepatic portal vein. They’re an incredible antiseptic in this way, enhancing your entire body’s immune system.

To recap: The sodium in celery juice is suspended in living water within the celery. Inside that living water are sodium cluster salts, tightly connected to it. So the cluster salts surround and suspend sodium, and they’re also varieties of sodium themselves. The different forms of sodium become one and they’re also separate. That’s how celery juice is structured. Medical research and science haven’t identified this yet because they haven’t tried to look beyond “celery has salt.” It’s not nearly that simple. If they analyze it superficially, it’s going to look like salt. If they analyzed it further, they would be able to separate out and identify the different varieties of sodium within celery juice. And then they would be closer to identifying all that these sodium cluster salts do for our health.

Rather than having to wait decades for these medical answers, you already hold them in your hands. You’ll find out so much about the surprising and potent benefits of sodium cluster salts throughout this book, particularly in the next chapter, “Relief from Your Symptoms and Conditions.”

– Excerpt from Medical Medium Celery Juice: The Most Powerful Medicine of Our Time Healing Millions Worldwide. Find out about the many ways celery juice helps you and answers to frequently asked questions in this New York Times best-selling book. 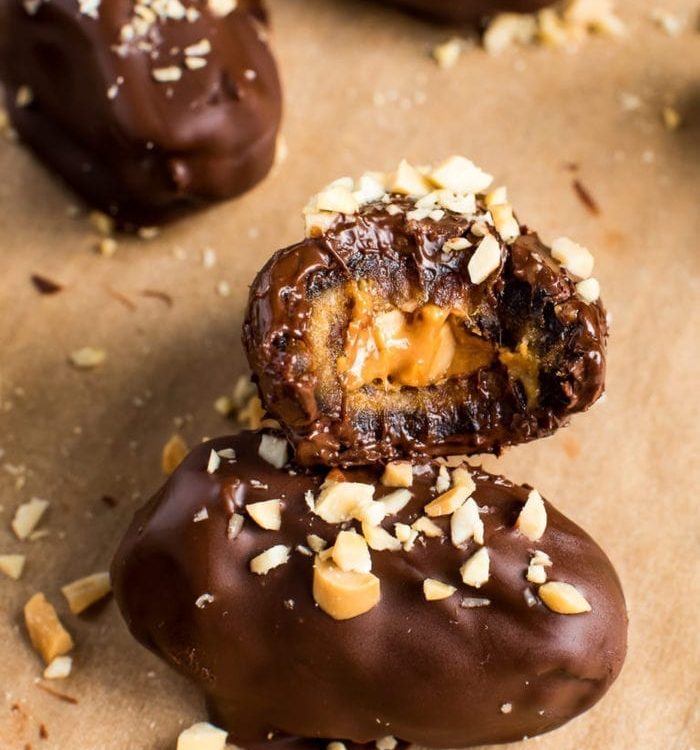 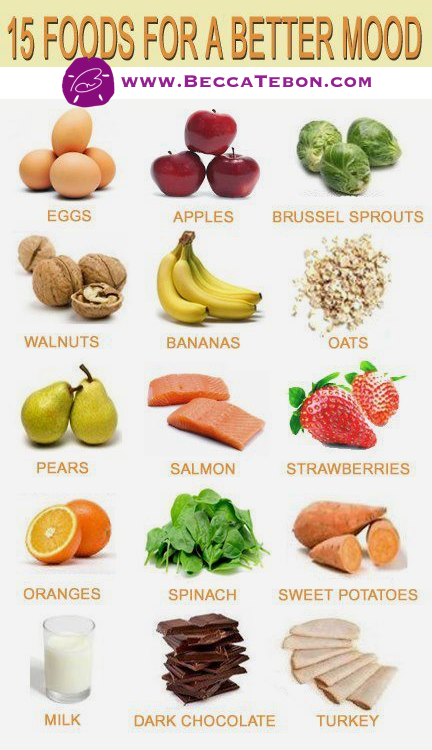 Food Is Associated With Feelings 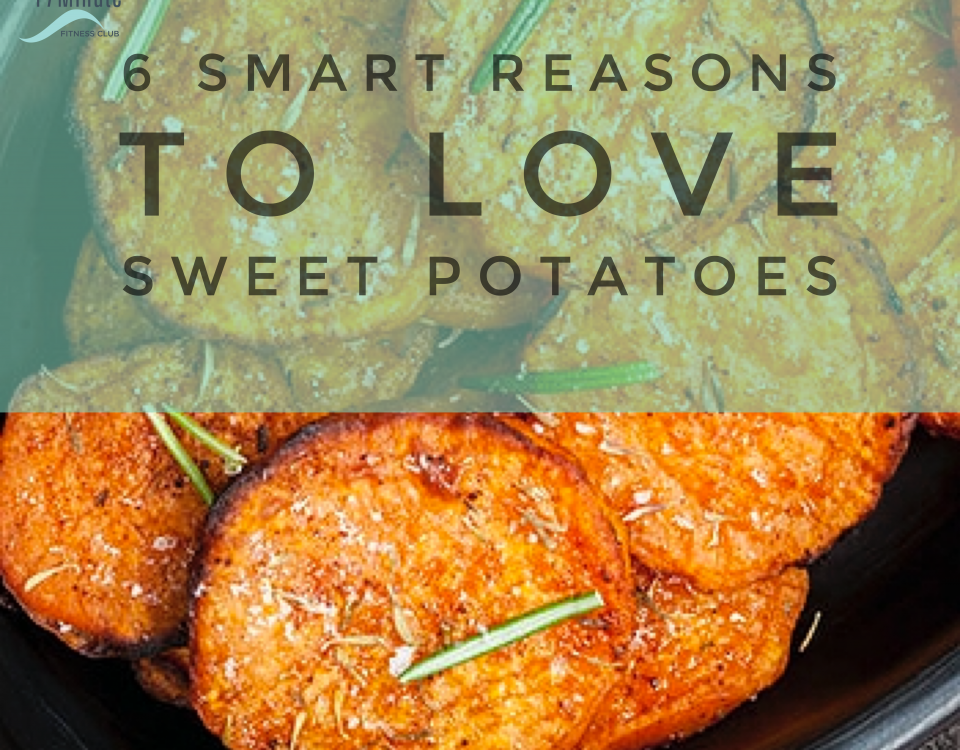